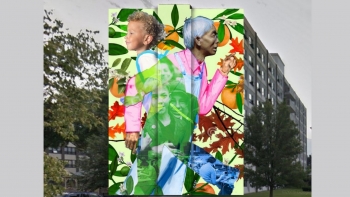 North Adams, May 25, 2021 - Over nearly 2 years in the making, the NAMAzing Ashland Street Initiative is excited to enter the final phase of their Commonwealth Places supported creative placemaking initiative on Ashland Street in North Adams. This effort, which encompassed bolstered support for 20 “tree city” plantings along the corridor, 6 mini-mural commissions and installations, locally made custom wooden benches, locally made custom NAMA bike racks, crossing flag stations and a bike repair station will be concluded with the capstone installation of a large scale mural at the North Adams Housing Authority complex. With numerous collaborators including but not limited to the Northern Berkshire Community Coalition, Common Folk Artist Collective, the City of North Adams, and O+ North Adams, the project will come to a conclusion by the end of June.

As announced in mid-2020, world-renowned muralist Gaia has been commissioned for the mural, which was approved in late 2020 by the NAHA board, and will be installed on the North side of the North Adams Housing Authority building starting June 4th. During the approximately 2-week installation period, onlookers will see the evolution from a brick wall to a bright depiction of several figures and groups representing North Adams’ past and future. The themes of the mural were derived from the over 250 paper and online surveys collected in early 2020 which the artist drew from to creatively compose the piece.

Central to the mural is the figure of Lue Gim Gong, a chinese immigrant who came to North Adams in the 1870s to work at a shoe factory. Lue, who had trained in horticulture in China, later moved to Florida following his contracting of tuberculosis, where he lived on property owned by North Adams resident Fannie Burlingame. While in Florida, Lue made the historic contributions most well-known to the world; developing the Valencia orange, along with a number of other enhanced fruit varietals.

Alongside him will be historical images depicting some of the women who worked in the Sprague complex in the mid-1900s, and images of the local “Mill Children” of the early part of the 1900s. The historic figures will be juxtaposed against an image of a young child, running full speed ahead into the future, representing the connection of our collective past to our bright future ahead.

The mural and previously installed elements of the project were made possible by a $12,500 matching grant from the MassDevelopment Commonwealth Places program, and fundraising done in 2019 with donations from over 100 contributors. Jennifer Hohn, the Executive Director of the North Adams Housing Authority notes “NAHA is extremely honored to be selected to host this large scale mural at the Ashland Street corridor and has been anxiously awaiting the transformation of the North side of it’s high- rise building since receiving this news. The residents of Ashland Park Apartments, NAHA staff and The Board of Commissioners are excited to see this project come to fruition. “.

Ben Lamb, Director of the NAMAzing Initiative notes “When we were looking to do the main mural as part of this effort, we aspired for it to be one that really was really FOR North Adams. From the surveys we received, it felt important to see how many folks acknowledged and celebrated the diverse, under-represented, and lesser-known figures, histories, and legacies of North Adams” he added “Personally, I was both inspired and surprised by the design Gaia developed, which I hope is a similar sense that locals and visitors to North Adams also experience when they see the final product.”

Following the completion of the mural, an interpretive sign will be installed near the sidewalk along the housing authority property, with the goal of this not only being a mural of beauty, but also an opportunity for education.